Of course, Betty is never without an animal living in her home. She says: “Animals have always been a way of life with my family. I never thought of myself as an ‘only child’ because our pets were my playmates and confidants. I cannot remember any family high spot, or crisis, or joy, or sorrow that didn’t include whatever pets we had at the time. More than once in my life I have dried my tears on soft, silky ears!”[1]

Her last pet was a dog named Pontiac, a Golden Retriever. He came to her already named because he began life in a Guide Dogs for the Blind training program. Pontiac had a bad leg, so he could not complete the program. He was offered to Betty right after the passing of all three of her beloved pets in a two month time period. She was not sure she was ready to start over again with a new dog just yet. But once she met “Ponti,” as she calls him, she was hooked. He passed on in 2017 at 16 years old, and she decided not to adopt again. It would be too hard to leave a pet behind. 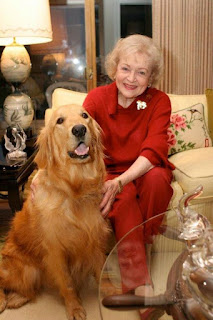 Betty grew up with lots of pets. During the Great Depression, when Betty was young, her dad made radios to sell and make extra money. But no one had any money to buy them, so he would trade them for dogs. The family had kennels in the backyard to house all of these dogs he got in trade for radios. Not exactly a big money-making scheme, but the family hated to turn any of the dogs away. At one point they had 15 and found homes for them all, except the two they kept.
“I’ll bet I was the only kid on the block whose parents would come home with a dog and say, ‘Betty, he followed us home. Please, can we keep him?’”[2] 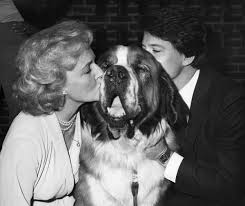 She always had a cat too. She thinks cats get a bad reputation for being distant and uncaring, but that has not been her experience. “Cats are not remote,” Betty says. “People who think cats are that way may never have lived with a cat. My Bob, for instance. If my knee was bent, he was on my lap or on my shoulder in a flash. He followed me around the house like a dog. In bed at night, I’d reach over to turn the light out and he’d be there. For eleven years I fell asleep with that purr on my shoulder. Cats love you very much—they are just more subtle about it.”[3]

Betty is confident you can have excellent communication with the pets in your life—better than anything you have with people. A dog will notice your every mood and react to the slightest change in body language.

She says the best example of this was a stray golden retriever named Sooner they took in and lived with for 15 years. “Talk about being on the same wavelength!” she says. “It got so that if I simply smiled at him across the room, he would wag his tail...but if I frowned, his ears would go down, and his eyebrows (trust me) became question marks! He didn’t always do exactly as I wanted, but it wasn’t ever because he didn’t understand...and he knew I outranked him. Once I realized that he was a smart as I was, we got along fine.”[4]

“Cats are every bit as sensitive,” she assures us, “but much more sophisticated. They are willing to pretend to cool it until there is some reason to get involved.”[5]

In 1987, she wrote about her current cat, T.K., saying, “She thinks she won’t give me the satisfaction of letting me know she is listening, but again, it is her ears that are the dead giveaway. When I speak to her she can look the other way in an elaborate show of inattention, but those black ears are turning like radar scopes, taking in everything.”[6]

“Where it begins to get a little weird is that to me, these stuffed animals are almost real. They have their individual personalities—some are looking right into my eyes—and when a new member joins the group, I introduce him to the others.”

She goes in and out of the room often because her fax machine is in there, but she always says hello and goodbye to the stuffed animals when she comes and goes. “I never leave it without saying, ‘See you later. I love you.’ Out loud!”

She seems to understand this is a little bit odd, but she doesn’t care. When writing about her stuffed animal obsession, Betty says, “It shouldn’t surprise you that I don’t often tell anyone what I have just revealed. Let’s keep it between us.”[7]

Okay, Betty. It will be our secret.

In an article for Chicken Soup for the Pet Lover’s Soul, Betty says: “I suppose, in the final analysis, I have invested a lot of time and love in animals over the years. But I have reaped such a great return on each investment. For through the many stages of my life, my feeling for animals has been an unwavering constant…a dependable reservoir of comfort and love.”[8]
{Come back next Monday for the chapter "Marriage and Family"!}