At her televised 90th birthday celebration, Betty White said she’s “the luckiest broad on two feet.” With a twinkle in her eye, she added: “To be able to spend a lifetime in the business you love, with the people you love, and get away with it, is just marvelous.”[1]

It really has been a lifetime in the spotlight for Betty. She started working in television right out of high school and has been a part of broadcast TV in one form or another for over seventy years.

In 2012, a poll showed that Betty White was America’s favorite and most trusted famous personality. 86% of those surveyed put her at the top of the list. Her Snickers candy bar advertisement during the 2010 Super Bowl, where a crabby Betty is tackled into a mud puddle, was considered the most entertaining, most unique, best liked, and most talked about ad during the whole program, which is known for its super commercials as well as super football.[2]

When she was little, Betty never planned on being a big TV star. There was no such thing as TV! She wanted to be a zookeeper or a forest ranger. But in those days (back in the 1920s and 1930s) a girl was not allowed to be either one. Boys only. That may have kept her from making a career out of the things she loved, but it did not dim her enthusiasm for interacting with nature and living things, especially animals.

As a child, Betty and her parents took annual camping trips that involved days riding on horseback and weeks in total wilderness. Since Betty was an only child, it would just be the three of them. They went to the High Sierras and Yellowstone National Park. When it was time for one of these trips, her dad would put on a forest ranger hat. That was the signal. It was her favorite time of the whole year. She says she counted the days until the next trip like most kids count the days until Christmas.
“In those days, we would never see another human during the whole three weeks—it was true wilderness. Heaven.”[3]

She says, “The three of us nature nuts would have a glorious time investigating this lovely planet together...something that has proven a constant source of wonder and joy to this day!”[4]

One of her childhood dreams came true after all. After hearing Betty talk about her youthful desire to be a forest ranger, The United States Department of Agriculture Forest Service proclaimed Betty an Honorary Forest Ranger. At a public ceremony on November 9, 2010, Betty got a hug from Smokey the Bear and her own ranger hat, just like the one her father always wore on their summer vacations. She says it was like her father was right there with her.
“He’s been gone all these years, but as the memories washed over me, I would swear my dad was standing right there. It is a moment I continue to replay in my mind.” 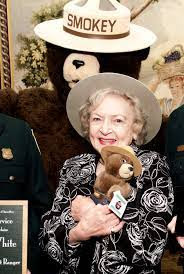 She says, “It truly was one of the greatest moments of my life.” She assured everyone present: “I shall continue to work my hardest to spread the word that not only must we protect our wilderness areas—we must appreciate them. They are an endangered species.”[5]

Betty’s other dream was to be a writer. As a child, she wrote poems and short stories, and she kept journals. To this day, Betty still does all of her writing in longhand and absolutely loves stationary stores. She buys loose-leaf paper at the grocery store all the time, whether she really needs it or not. Though it is not one of Betty’s main claims to fame, she has written and published several books over the years, including two in 2011 alone. They are mostly autobiographies (and are the main source of the information about her life for this book).

Her big introduction to performing was actually a play she wrote in elementary school. Of course, she wrote a lead role for herself. That role played a huge part in launching her dreams off in a new direction that she could not have even begun to anticipate. Television still didn’t exist. She just discovered that she had the ability to entertain.

Three months after her high school graduation in 1939, Betty would start out on a career in comedy and acting that would continue, without any serious down time, for over 70 years. Most people retire well before they are 70 years old, but Betty is still going strong in her 90s. She may even be more popular now than she ever has been, though the last few years she has performed less and less. A pandemic didn't help.

But more on that later. What Betty would really want to talk about first is her love for animals, her charity work, and her experiences with amazing animal friends. Fabulous things you probably know nothing about.
{Come back next Monday for the chapter "Animal Friends"!}

[2] Ipsos.ca. 2012. Betty White is America’s Favorite and Most Trusted Personality, and the Most Prone to Driving Brand Purchase. www.ipsos-na.com/news-polls/pressrelease.aspx?id+5306.