Today I'm helping to spread the word about a fun

upcoming anthology for a wonderful cause. 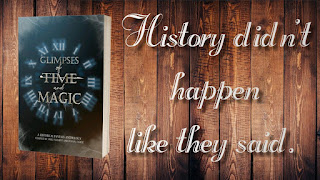 Glimpses of Time and Magic

Price:
$3.99 and all proceeds go to Feed My Starving Children

History is quite a fascinating thing. We know the stories that have been told to us since we were children, but there are secrets…Magical secrets that are desperate to be revealed.

Pompeii was a tragedy the world will never forget, but what really caused the volcanic eruption that ended it all?

Why was the great sword Excalibur really destroyed?

The rolling hills of Victorian England seem peaceful enough, but what secrets really lurk there?

And would it surprise you that there are darker secrets in Ancient Rome than people ever dreamed? If the Great Fog of London isn’t what it seems?

You think you know Harry Houdini, but do you know the man behind all the tricks?

And what if Roanaoke runs deeper than you could ever imagine?

Could Ireland’s potato famine really be caused by a mage gone mad?

What if a ghost ship off the coast of England was more than a phantom?

Tell me a bit about this anthology.
Glimpses of Time and Magic was put together by Ariel Paiement and Joanna White. They wanted to have a historical fantasy collection to sell to raise money for a charity. The book covers eight different historical time periods, putting a twist on the history you know. Travel to ancient Rome or Ireland right before the potato famine. Discover what happened to Pompeii and Houdini. The stories you think you know just might have a bit of magic thrown in.

Tell me a bit about the fundraiser and why it matters to you.
The idea behind the anthology was to raise money for a charity. As a group we decided on Feed My Starving Children. The organization provides food for children in impoverished areas by providing them with a “manna pack”. These packs are put together by individuals and then sent out to the children.

I voted for this organization, because they believe in more than feeding the body. They also focus on the spiritual aspect of the children and families. This made me feel comfortable giving to them.

If you could travel in time, would you go to the past or the future? Where would you go and why?
Hm, good question. I’d love to visit the medieval times, but then again, I know it wasn’t the best. Seeing Jesus would be amazing! Maybe travel to a Bible story and witness it first hand. That would be really fun, but I bet my expectations would be blown out of the water—maybe even in a bad way. Often my idea of what something was like isn’t anything near what it was like.

Tell me a bit about your story in the anthology and your inspiration.
I wrote The Apprentice of Amadan Dubh. When asked to join the anthology, I wondered what timeframe to use. As I debated, I was sucked back into the black hole of my family tree. My great-aunt wrote out a book about my dad’s family, and I’ve gained her fascination with discovering our ancestors and their possible stories. There’s one in particular that I can’t find information on. My aunt says that Patrick Maher settled in Westerlo, NY, after journeying here from Ireland. We don’t know when he came over, only that he died in 1863 and had his first son in 1825 while in Westerlo.

So, I thought, why not write my own history of Patrick. I threw in magic and some family health issues and wrote the tale of a young boy who loves the flow of magic under his toes. When the mage takes him as an apprentice, he’s on cloud nine, but when the mage presents a dark magic, Paddy will have to determine if it’s worth losing everything dear to him.

I chose 1820, Knockarley as the setting because I found a census that has a Patrick Maher living there along with a younger Patrick Maher. The townspeople are from that census document. It was fun to explore and dream of what it would have been like to be Paddy. When we created the cover image for my story, I used my son, who loves his Irish heritage, as Paddy. 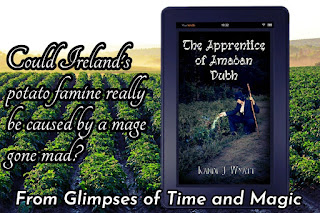 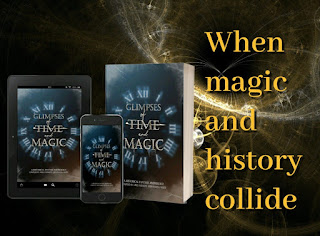 Posted by Meg Welch Dendler at 11:30 PM No comments:

If She Had Stayed: Book Review

If She Had Stayed by Diane Byington
My rating: 4 of 5 stars

Thoroughly enjoyed this story about regret, what we'd do differently if we got a second chance, and learning lessons the hard way sometimes. If you are a fan of Tesla, you will be thrilled at how he is woven throughout the story. I could have done without the detailed sex scenes, however. They felt out of place with the style of the rest of the story, and I kept thinking what a great book it would be for even middle school classrooms (all the fun what-if assignments!) without becoming so graphic. Sometimes fade to breakfast is best. I still enjoyed the read and stayed up to get through the last chapters. Very suspenseful!

View all my reviews

Posted by Meg Welch Dendler at 7:19 AM No comments: