Please welcome Kevin Davies to my blog today. I'm no stranger to litter box issues for a variety of reasons over my decades as a cat owner. One of them did involved kidney disease that I didn't understand (and desperately wish I had at the time). Currently, Miss Hiro refuses to use a box for her own reasons (mostly having gotten jumped by Miss Fatty Cat or Cheetara when leaving the box), but we have reached some compromises and consistency for where she will go potty. Hopefully you can find some answers for your current or future litter box issues.

Cat Litter Box Problems: What to do When Your Cat Decides Not to Use the Litter Box

What many cat owners do not understand is that their cat is not acting out of spite when he/she does not use the litter box. There are numerous reasons for litter box problems, but most of them result from disease, mismanagement of the litter boxes by their human owners or normal feline behavior patterns.

What to do When Your Cat Begins Experiencing Litter Box Problems

The very first thing which needs to be done if your cat begins to urinate or defecate outside of the litter box is to have your cat examined by your veterinarian. Numerous medical issues can cause a cat to urinate and/or defecate outside of the litter box. Other symptoms which may or may not accompany inappropriate elimination behaviors include bloody urine, frequent urges to urinate, excessive urination, excessive thirst, loose bowels or diarrhea and difficulty or pain when moving bowels. If disease is present, successful treatment may resolve the litter box mishaps.

Cats which are unable to urinate need to have immediate veterinary care. Urinary tract obstructions are an extremely painful and life-threatening occurrence and can cause death very quickly if appropriate medical intervention is not performed.

Litter boxes must kept very clean. This usually means removing solid waste at least once daily. For some cats, scooping several times daily may be necessary. Scoopable litters tend to make this task easier and many cats also prefer the texture of scoopable cat litter.

Place cat litter boxes in various areas of the home. There should be at least one litter box on each floor of a multi-level home. Litter boxes need to be placed in low-traffic areas that are calm and quiet. They should be easily accessible for the cat and care should be taken that the cat is not disturbed or frightened when using the box. This means small children and other pets (such as dogs) should be kept away from the litter box area, particularly when it is in use. Litter boxes should not be placed near washing machines and dryers as these machines tend to make noises that frighten many cats as they go through their washing and drying cycles.

Litter boxes must also be chosen to allow the cat to get in and out of the box easily. For older cats with mobility issues and very young kittens, this may mean choosing litter boxes with low sides which the cat can climb over easily.

Litter boxes should also be big enough to allow your cat to stand and turn in the box easily without being cramped or hanging over the edge of the box. Cats tend to prefer large litter boxes to smaller ones.

Use non-scented cat litters. Cat litters that have heavy scents may be more pleasant for us, but some cats object strongly to the scents and will avoid a litter box filled with these cat litters.
Some cats have preferences regarding the texture of the cat litter used. In general, scoopable litters most closely resemble sand and many cats prefer these scoopable litters. However, this is not true of all cats. Experiment with different types of litters if your cat is avoiding the litter box. Try different types of scoopable and non-scoopable litters. Try litter substitutes as well, such as Yesterday’s News®, a pelleted form of recycled paper. Fill several litter boxes with different types of litters and place them next to each other. Observe to see which one the cat uses most often to determine which the cat prefers. Once you have identified the type of litter that your cat prefers, use that litter in his/her litter boxes.

Other Environmental Modifications That Can Prevent Cat Litter Box Problems

Stress has been shown to cause urinary tract disease in cats, specifically interstitial cystitis (a form of inflammation within the feline urinary bladder). Most cat owners do not recognize that an indoor lifestyle is generally stressful for a cat. This is true in single-cat households, but is even more of an issue in multi-cat households. Fortunately, there are some very simple things a cat owner can do to make indoor life less stressful for their cat or cats.

▪         Provide plenty of perches for all cats in the household. Cats enjoy being on a raised surface and may feel safer when they are not forced to nap on the ground. They also enjoy examining their environment from their elevated perches.

▪         Provide plenty of hiding spaces for all cats in the household. A hiding place should be a quiet, secure area where your cat can retreat if he/she feels threatened or wants to be alone. Hiding places that block the view of other cats in the house are also helpful in eliminating aggression between cats. These may be cardboard boxes, carriers left open and lined with a blanket or towel, or cat beds.

▪         Provide food and water at various locations throughout your home if you have more than one cat. This eliminates competition for these resources and avoids fighting and stress from a perceived lack of access to adequate food and water stations.

▪         Provide interactive toys which provide mental stimulation for your cat. Cats have a natural tendency to prey on small animals and appropriate cat toys can simulate that prey behavior and keep cats entertained. Toys with feathers can be used to imitate birds, toys which can be pulled along the ground can imitate mice and other rodents, and laser pointers can imitate bugs. Food puzzles can also be used to provide mental stimulation and exercise for indoor cats. Just be certain not to leave your cat untended with toys which contain strings which can entangle a cat or which can be swallowed, small pieces which could be ingested or other unsafe features. Place the toy in safe location where your cat cannot access it when you are not home to supervise play with these types of toys.

Urine marking is a term which is used to describe the act of urinating outside of the litter box in an effort by your cat to mark his or her territory and tell other cats to stay away. Urine spraying is a specific type of urine marking behavior which involves urinating onto a vertical surface, such as a wall or piece of furniture.

Both male and female cats are capable of urine marking. Neutering or spaying is often helpful in controlling urine marking and urine spraying behaviors. However, it should be noted that a small percentage of cats which are neutered/spayed will still mark or spray, especially if the behavior has been occurring for a time before the surgery is performed. Neutering or spaying does not guarantee that a cat will never mark or spray but it is effective in the majority of cases (probably as many as 85-90% in my experience).

Pet owners need to understand that cats which spray or urine mark are performing what is, to them, a perfectly natural behavior. Your cat does not understand that this behavior is wrong and he/she is not marking or spraying solely to annoy you. Cats should never be punished for these types of behaviors. Punishment will only make the cat apprehensive and may actually end up making the problem worse!

Feliway® is a calming pheromone which is produced naturally by all cats. Being a pheromone, the cat’s olfactory system will detect the chemical but you will not be able to smell the product. Feliway® can be effective in controlling inappropriate elimination in cats and preventing urine spraying and marking behaviors.

Feliway® is available as a diffuser which is plugged into an electrical outlet in your home or as a spray which can be used around litter boxes, near doors and windows and in other areas of the home.

While litter box problems are problematic and frustrating for cat owners, there are techniques which can be used to prevent or control the inappropriate behaviors. Proper care of the litter box, choosing the correct cat litter, spaying/neutering all cats and simple environmental modifications can all be used to help fight feline litter box problems.

Posted by Meg Welch Dendler at 10:11 AM No comments: 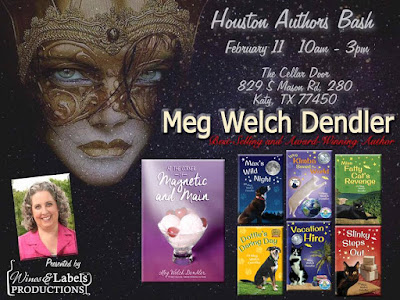 My book tubs are packed and ready to head to Houston for next weekend's Author Bash. This was a fantastic event last year, even though there was a last-minute change of venue, so I have really high hopes for 2017.

There will be lots of great authors there. If you are in the area, be sure to stop by. And bring a wagon. Seriously. People show up with wagons to hold all the great books they buy. And for those of you who like that sort of thing, some of the romance novelists bring their cover models. Hmmm. 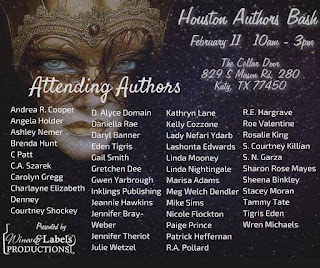 Quite a selection to chose from! And it's held in a wine bar with delicious food, so there's always that for after you shop.

Hope to see you there!