With Kimba at my elbow purring up a storm, I send you wishes for a blessed and love-filled Christmas week.


If you are looking for some last-minute gifts, ALL of my books are on sale on kindle this week.

"Why Kimba Saved The World" is FREE until December 26th. And all the other books in the series are 99 cents until the 27th.

You can also get "At the Corner of Magnetic and Main" for only 99 cents on kindle until the 26th. Many thanks to my publisher for dropping the price for the holidays! I ran this ad with Ereader News Today and have already seen a spike in the rankings. I hope some new readers are finding it and me. 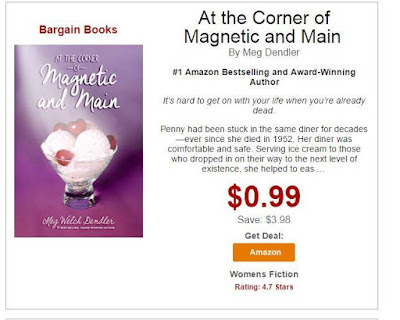 Merry Christmas, from our house to yours. I have a feeling that the normal Christmas movies will be replaced by a Star Wars marathon this year. We have plans to see the new one next week. As long as the girls are both here and everyone is happy and healthy, I don't much care what is on the TV. May the force be with you in 2016! 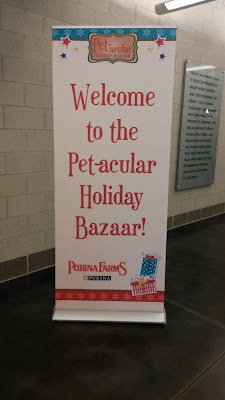 We were fully prepared for the fact that it would be mostly dog people there (with their doggie friends). The event center is used for dog shows and the like all year long. What was interesting, though, was that we sold a bunch of cat toys (separate from any book sale) but not a single one of the cute dog toys. The border collie rescue place down the aisle had the same dog toys at the same price, so maybe folks got them there instead. I won't fuss about that one bit.

Across the aisle from us was JKL Wood Art. They don't have a web site to share, but we had many long talks with Leigh during the down time. She ended up going home with several of my books, including a copy of "At the Corner of Magnetic and Main" for herself and her daughter. She also got a whole set of my children's books to donate to her local school district: Lonedell R-XIV in Missouri. I hope they love them! I must say, the way Leigh asked me to sign her book copies may be my favorite ever. 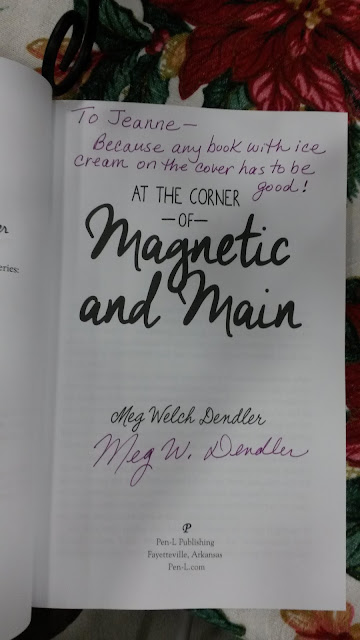 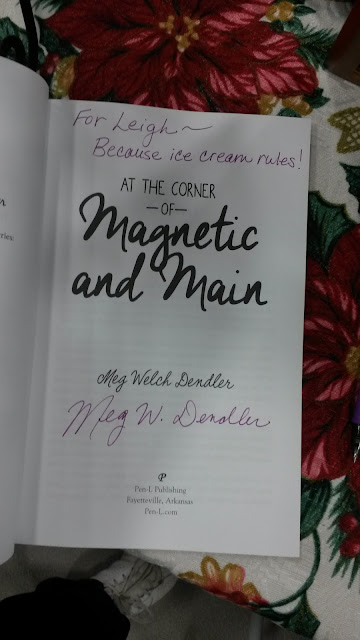 There were events going on the whole time, but we were on the far side of a divider and couldn't see any of it. Local dance schools did "Nutcracker" performances, there was a choir and bells, and dogs tried their agility on a small course. Scott caught some of the duck herding, and he said it was really impressive to watch the way the border collies moved and obeyed commands.

Then, of course, there were the dogs. Big ones and small ones and loud ones and super-obedient ones. I always love to watch dogs walk along with their owners and see them glance up, over and over, ready to jump at any command and with eyes totally full of love. Though, I must say, the deaf St. Bernard who refused to go home (just plopped down and wouldn't move) may have been the best entertainment of the day.

Overall, it was a fun way to spend the weekend. Saturday sales were decent, but Sunday was a total flop. I appreciated that the booth fees were reasonable, but since it was over a four hour drive to get there and a hotel stay was required, we lost money on the event. Scott and I did enjoy a nice weekend away from the guest house and litter boxes and such, which hasn't happened since I literally don't remember when. That helped to take the sting out of it.

If we were closer, I would do it again. But we are not. I did learn about the Kansas City Amazing Pet Expo in June, so that may be a better event for us. We can pull that off without a hotel.

Holiday book orders have shipped out, and we are settling in for the winter months ahead. There are no events in January. The weather is too unpredictable to plan much of anything. But I'll be back in the flow with two events in February, at least. "Slinky Steps Out" will be back from the editor in January, so the fun of formatting and cover design will keep me busy during the winter.

We are celebrating the wonderful news that "Leia" was accepted into the School of the Art Institute of Chicago (SAIC) for her freshman year of college in 2016. If you've read "Max's Wild Night," you've seen her drawings that were used within the text. She is over the moon that she could get in, but she still has decisions to make. Other liberal arts schools are on the radar (and she's been accepted), and we haven't heard back from the Kansas City Art Institute yet. She did appreciate the welcome gift from SAIC of some fun and arty gloves. Does a full-ride scholarship come with them?? 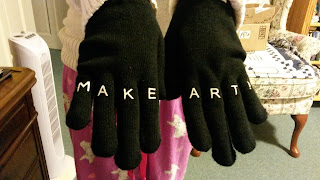 The weather is getting ready to take a much more winterly turn, and we have a few days of semester exams ahead before we can really relax for the holidays. I have some Christmas specials going next week, so you'll hear more from me on that on the 22nd. I'm supposed to be having a Facebook book party that day, but so far very few people have agreed to take part. Not sure I'll bother if no one cares. Click here if you like prizes and games and bookish fun.

Have a great week, and don't stress out too much. It's a season of joy!!


Posted by Meg Welch Dendler at 3:51 PM No comments:

On Wednesday, I had the great pleasure of meeting with the writer's group in Bella Vista, Arkansas. They have larger Saturday meetings once a month, but this Wednesday group is new. It was small, with six people attending, but some of them were there for the first time, so it's always fun to get in on the ground floor. 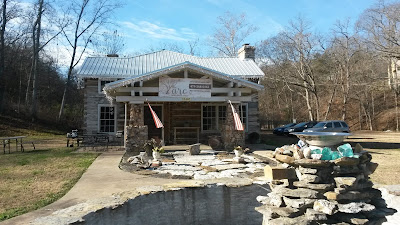 They meet at the beautiful Artist Retreat Center in Bella Vista. If you have not visited them, it is worth the trip. Artists of all kinds are supported and allowed to rent exhibit and concert spaces in this lovely and well-appointed building. I was very impressed.

I modified my talk about "Running With Inspiration" and shared ideas from the new book "Big Magic" by Elizabeth Gilbert and the more tenured "The War of Art" by Stephen Pressfield. My newest book, "At the Corner of Magnetic and Main," is a perfect example of running with the inspiration that comes because I had no plans at that time to write an adult book. The spark was there, and I ran with it. We also spent a long time just chatting about the publishing process, current trends, and the differences between self-publishing and going the more traditional route these days. 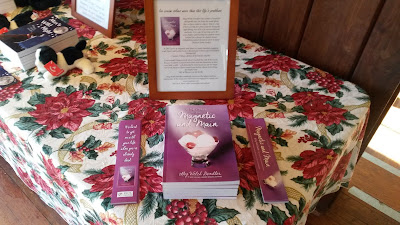 They let me set up a book table, and three members went home with copies of "At the Corner of Magnetic and Main." It was a delightful way to spend a few hours of the afternoon, and I was quite impressed with the works in progress that some members shared. Wonderful writing! There will be some new books out of that group shortly, I'm sure.

If you don't get my newsletter, you can check out the holiday edition here and get in on some December paperback sale prices. It is getting almost too late to guarantee Christmas delivery, so don't wait long.

Also upcoming is my Facebook party to celebrate the end of the official launch of my new book. There will be games and prizes and fun. Click here to find out more and join us!

The weather here is ridiculously warm, something like 70 today, so I think Max will be getting a good bath in the yard. I hope each of you is staying sane and finding joy in each moment of this crazy holiday season. It will be over before you know it, so savor each concert, party, and family gathering. And enjoy a good book or two . . . or three . . . or four.


Posted by Meg Welch Dendler at 9:50 AM No comments: