I'm participating in an ebook promotion with a group of female authors who all have our books discounted until August 14th. Check out the fun summer reads! Grab them while you can!

For my part, The Tigran Chronicles ebook is on sale for 99 cents. 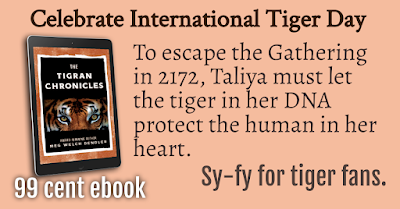 Posted by Meg Welch Dendler at 10:19 AM No comments:

A quick note to those of you who are The Tigran Chronicles fans: a free novella is now available. 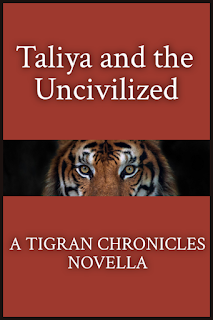 You can get a copy when you sign up for my Readers' Group at this link.

Taliya the tigran and her husband Kano are sent by President Nakobi to help create a reservation for the wild tigran who survived the Gathering. But there are more than tigran loose in the Colorado wilderness.
Note:
This novella is designed for readers of The Tigran Chronicles
and will be confusing without reading that first.

Posted by Meg Welch Dendler at 12:07 PM No comments:

As I write this, I'm enjoying blueberry pancakes created with delicious blueberries Scott and I picked yesterday at The Berry Fest. If you are fans of Fixer to Fabulous, you know about Jenny and Dave Marrs, but you may not know about their charitable work, including The Berry Farm. This is the second year of this fundraising event, and it was ridiculously hot (like "danger level" according to our weather guy) but still a delightful evening.

The purpose of the fundraiser--copied from their website:
In partnership with Help One Now and their local leaders in Marondera, Zimbabwe, our farm will provide resources to train and empower teenagers and young adults to transition into adulthood with the skills that they need to succeed. Our farm funds The Gatehouse Project, providing training and mentorship in agriculture & livestock, wood & metal working, business management, textiles, cooking and even technology to over 80 orphaned and vulnerable children at Musha WeVana Village in Zimbabwe.
If I'm going to pick blueberries in the summer heat, it helps knowing the proceeds are going to support something so important. Plus, there was live music and delightful company.

Besides getting to say hello to Dave (I love how he is constantly so excited to see everyone and responds like you are an old friend he's so glad showed up), we also had a star sighting of Keith and Evan from Bargain Block. Detroit native Scott was tempted to yell, "Go Blue!" but they were talking with someone and, well, it was SO hot. We just ate our Kona Ice in the shade instead.

And if you are somehow not familiar with Fixer to Fabulous, I highly recommend you check it out. Season 4 is in process now. Besides wanting to support a local business, we just love the show. Reruns are on HGTV all the time, and I often leave it playing, even if I don't have time to watch, so they get the ratings. Go Jenny and Dave!

On the business side of things, I'm wrapping up a novella, Taliya and the Uncivilized, that will be free for newsletter subscribers. It covers an event during the three years in The Tigran Chronicles between the end of the main story and the epilogue. Hopefully that will be up and ready through Book Funnel by the end of July. There are more novellas to come, and a full sequel. Many more adventures for Taliya and her tigran crew.

I don't normally do book events during the summer. It's just too hot! But we will be back at it again in the fall. Reminder: We will not be at the War Eagle Craft Fair this year. Instead, we will be INSIDE at the Springdale Conference Center that weekend. The whole outside plus easy-to-damage books is something we are trying to avoid in the future, but it will be odd not to be at War Eagle. It's a great event, and we met many of you there!

Have a wonderful Father's Day Weekend! Scott has already enjoyed some blueberry pancakes and will be celebrated by his daughters (and Hiro) tomorrow. He's also already seen the new Top Gun movie. He's kind of a fan. 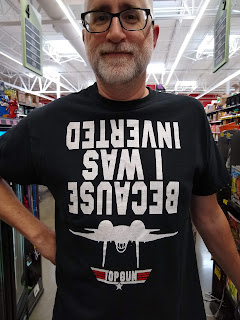 Posted by Meg Welch Dendler at 8:37 AM No comments:

We never could have anticipated the impact finding those tiny newborn kittens in a box would have on our lives. Beyond loving them to the moon and back, writing about Kimba started me on the book publishing journey that now includes eleven titles.

We are grateful to still have them with us and living healthy, if a bit slower, lives. Kimba doesn't climb ladders anymore, but she chitters at us anytime we step out of line or alter her schedule. Hiro still convinces Daddy to do everything she wants. We are all looking forward to many more happy years.

We will be at the Dogwood Festival in Siloam Springs, AR, next weekend, so stop by the Serenity Mountain Publishing booth and say hello . . . and pick up a book or two.

Posted by Meg Welch Dendler at 7:00 PM No comments: 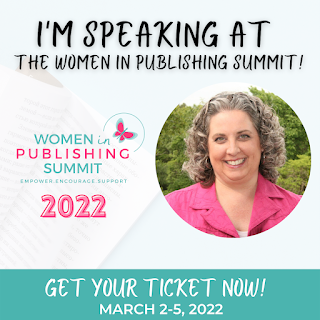 My topic this year will be "Self-Editing So Your Manuscript Shines."

This is my second time speaking at this online conference, and I highly recommend not only the workshops and talks but also the active community created around this event. You can still get tickets and join us. Just tap here!

This four day virtual event covers all of the key aspects an author or aspiring author needs. (Everything is live, but recorded, so you can watch and re-watch at your convenience.)

Day 4: How to grow your author business

Sponsored by GracePoint Publishing, Pub-Site, ProWritingAid, Aurora Publicity, Your Book is Your Hook, and a whole group of amazing companies who believe in the mission, AND are offering great discounts on their products, you're sure to leave with amazing content under your belt, great discounts on services you need, and a COMMUNITY to support you along the way.

No matter where you are on your author journey, this summit is for you. It covers everything from writing to publishing, and from marketing to whatever comes next. If you haven’t finished your book yet - heck, if you haven’t started your book yet - you’ll learn from this summit. And people who have published multiple books will also learn from the 60+ presenters who will be sharing their knowledge.

Probably the most special thing about this event is the community. We spend a year together in a private Facebook group where we're networking, sharing resources, and helping each other out. We also have a monthly networking event, which everyone is loving!
So join us!!
Get your ticket now and use the coupon code: 50OFFWIP22 to save $50!

Posted by Meg Welch Dendler at 10:24 AM No comments:

Wait no longer, Bianca: Journey to Ryuugito has arrived and is ready for purchase! 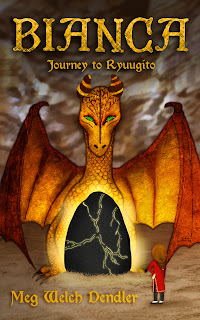 At other ebook retailers. 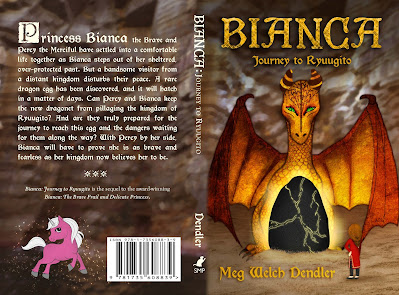 Yes, that's a unicorn on the back cover. Of course Bianca will meet some interesting creatures on this second adventure. It felt only logical there should be a unicorn in there somewhere. Especially a magical one. You'll have to grab a copy to find out more!

Posted by Meg Welch Dendler at 8:02 AM No comments:

In 1987, Betty wrote, “I don’t want to fight old age, but I’m not about to invite it to live in, either. I want a nice symbiotic relationship with it, where we are totally unaware of each other.”[1]

That was an attitude toward growing old that Betty learned from her mother. Never waste time dreading the next day—or next birthday. That is just the ultimate way of being ungrateful for all the good in your life. Death is just another adventure ahead, not something to be feared. Betty found this very comforting. [2]

Betty says she avoids feeling jet-lag during her many cross-continent airline trips because she never resets her clock. She just keeps going forward as if the time has not changed. “Maybe the reason I don’t feel my age could be that I never reset my calendar either,” she thinks.[3]

“If one is lucky enough to be blessed with good health, growing older shouldn’t be something to complain about. It’s not a surprise, we knew it was coming—make the most of it. So you may not be as fast on your feet, and the image in the mirror may be a little disappointing, but if you are still functioning, and not in pain, gratitude should be the name of the game.”[4]

Betty says: “I can credit my folks for my genes. That said, I can’t get over that at this age I don’t feel this age. I’m not trying to be any younger. I’m not lying about my age. If I were lying about my age, I would say I was 89. I’m just at one of those good times in one’s life. I’m at one of the high spots. I’m healthy enough to enjoy it. I’m surrounded by friends I adore. Isn’t that kind of the best way to sign off?”[5]

At the end of her televised 90th birthday special, when Betty was finally up on stage and honored with a long standing ovation by her many friends and co-stars over the decades, she winked and blew a kiss toward the sky—thinking of Allen’s presence right there with her and thanking him for being a part of her long, fabulous, and truly amazing life. 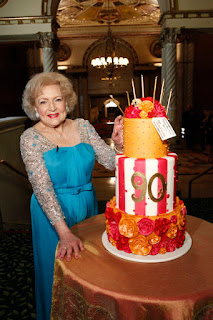 White’s agent and friend, Jeff Witjas, told People, “Even though Betty was about to be 100, I thought she would live forever. I will miss her terribly, and so will the animal world that she loved so much. I don’t think Betty ever feared passing because she always wanted to be with her most beloved husband Allen Ludden. She believed she would be with him again.”

On December 30th, 2021, Betty White passed away in her home of natural causes. It hit fans particularly hard because it was only a few days before her 100th birthday on January 17th. People magazine had already released a special issue about Betty and featured a cover story about her in the regular edition for the week before her birthday. 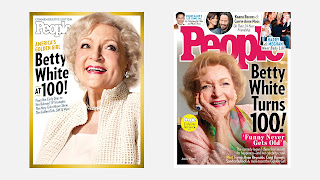 The People article quotes Betty: “My mother always used to say, ‘The older you get, the better you get. Unless you’re a banana.’”[6]

Over the years, Betty shared a story of her mother comforting her on the subject of death. She assured Betty that there is more to experience on the other side of what we see as death. Those who have passed on now know the answers to what lies ahead. 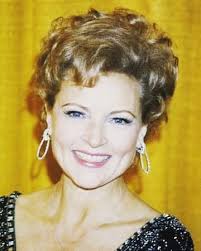 And this concludes my series on the fabulous Betty White.
Betty White: A Celebration will still be screened at movie theaters on January 17th.
You can participate in the Betty White Challenge by donating to your favorite animal charity or rescue organization before the 17th. I donated to Turpentine Creek Wildlife Refuge, where I volunteer regularly. What a great way to honor Betty's memory! 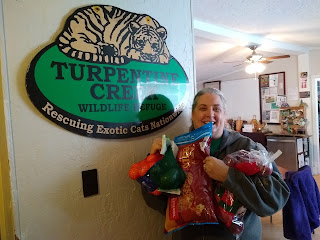 Cheerios, apples, oranges, and avocados for the bears.

Posted by Meg Welch Dendler at 4:00 AM 2 comments: 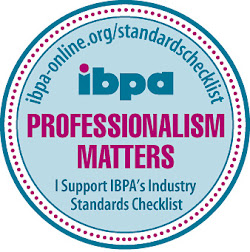