Life As An Editor

Working as an editor is normally a very quiet part of what I do each day. I rarely talk publicly about what I'm working on. Part of that is respecting the author's privacy, and another part is just how editing is as a profession. It's the behind-the-scenes job that makes a huge difference but stays under the radar of readers.

But last night I got this gift from Pen-L Publishing, and I just have to crow a little bit. 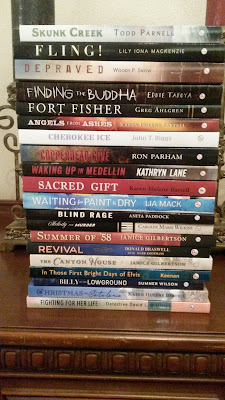 Duke and Kim presented me with a copy of each published book I have worked on with them since December of 2014--as an editor or a proofreader. There are six still in the process. Some of these authors have become friends through the magic of Facebook. Some have no idea who I am except as a correction or note on their manuscript.

Publishing a book is a LONG process, and I'm not including the original writing. Just the publication. It takes about six months for the editing and proofreading and formatting and cover design, even with an independent publisher. And the manuscript may well have been signed for publication six months or more before that and been waiting its turn in line. Then there's the process of getting reviews from places that demand advance copies. Publication may be delayed another six months while the author waits for places like Kirkus to review the book.

What I think authors don't really understand is how invested those of us behind the scenes become in their books during that time. I'm not the creator, the mama, but I certainly feel like a very devoted auntie. When a book is released into the world, it is like graduation day. It's hard to put into words, but I freely admit to getting a bit giddy when I hold a copy of a book I helped produce. I've even hugged a few of them. I know. I'm weird. But there it is.

It's not the same rush as holding that first copy of a book I've written myself, but it comes close. A story that I have spent hours and hours and hours reading and shepherding along is finally out in the world. Even if it's not my favorite genre, there is still a delightful rush and a sense of pride in knowing that an author--the vast majority of whom I've never met--is celebrating the publication of his or her book baby. I know how that feels, and I'm honored to be a part of it.

A very exciting part of the job that I never anticipated is that many of these authors are writing a series, and I have the chance to work with them on developing that on-going connection with their readers. A few have also trusted me with personal projects or manuscripts in the works. I know what it means to trust someone with my own books, and I'm honored.

I remember early on in my writing career having a discussion with my editor at a magazine about a particular article. I joked that those folks who win Pulitzer Prizes must have moved beyond needing an editor. She said that they probably won because they have an excellent editor. Touché.

And that's all for now because several manuscripts are waiting for my attention and love. Not to mention my own WIPs. Let's see how many book babies we can bring into the world in 2016!
Posted by Meg Welch Dendler at 10:46 AM 4 comments: