First of all, welcome to all the folks following this blog tour!

At the end of this post, you can find a list of all the clean fiction indie writers who are participating in this tour. Be sure to check them out!

Now, if you are not familiar with my books but are just following the blog tour, you're probably wondering about the whole "alien rescue cat" thing. My middle grade Cats in the Mirror Series follows my own rescued house cats in their made-up alien lives.

To start, here's the books in the series:

This series all started with my rambunctious cat Kimba and her shy sister, Hiro. My husband found them in a box on the steps of a house under construction when they were only a day or two old, and we hand-raised them with bottles and loving care (see kitten images on sidebar of blog). Cats raised without a feline mother are often a bit odd and don't really understand how to cat well. Kimba and Hiro are no exception. 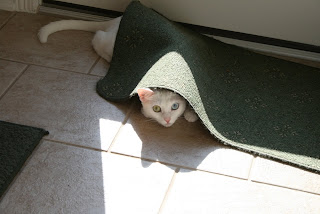 After years of their nutty antics, I started to get some ideas and began jotting them down.
One of the mantras for writers is to "write what you know," and I did just that. As Kimba grew up, I started writing short stories about her and how she is really an alien sent to monitor us and ultimately save us from an alien cat invasion. Those stories developed and developed until I realized I had a whole book series in the making. My daughters' rescue cats, Miss Fatty Cat and Slinky (not their real names), were worked into the series, and companion books about our dog Max and my daughter's dog Dottie found their own life as well--though the dogs in the books know nothing about the whole alien cat thing and just have adventures of their own. Each of the dog books is a stand-alone story, though you'll find fun tie-ins if you know the cat books.

Being middle grade books and aimed at younger readers (though I have lots of adult readers as well), the whole series is squeaky clean. Or would that be meowy clean?
If you'd like to check out any of these books, I've had a few deals going on this spring while I participate in conferences, blog tours like this, and prepare for Kimba and Hiro's 14th birthdays. Yes, 14! They've come a long way since those kittens the size of mice we found abandoned.
All of my ebooks are 99 cents at all the sites that carry them, and if you look outside of Amazon, you can probably find Book 1, Why Kimba Saved The World, for free. Tap here for the link to my Amazon page.

Bianca: The Brave Frail and Delicate Princess is another of my middle grade clean reads, but we don't have time to go into her lengthy story (that started when I was in 5th grade) in this post.

And since I haven't been able to do any in-person events of any size for a year now, I have some paperback sales going on at my Square site. Copies are $7 or $8 each, and there are special package deals. 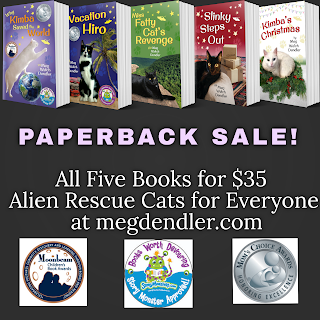 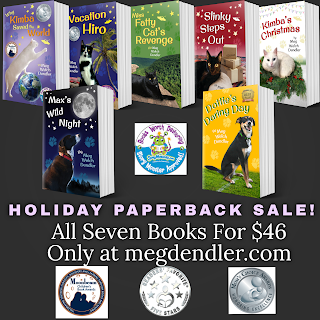 I'm always happy to Zoom-meet with homeschooling families or groups, so feel free to be in touch with me. You can also watch me read all of Max's Wild Night at YouTube--my first offering to families sheltering at home during the lockdown.

Thank you to Story Quest Academy for including me in their blog tour of clean books for young readers.

Story Quest Academy is a creative writing academy that focuses on
building essential skills through writing short stories and reading
books. Our goal is to help homeschooling tweens and teens to become
better writers. We want kids to LOVE stories, cultivate their creativity,
and boost their imagination.

Check out the other stops on the tour, and be sure to comment and share each post to be entered to win the prize pack filled with ebooks and a scholarship to Story Quest Academy! Tag @StoryQuesters so the host can see each of your entries.

Posted by Meg Welch Dendler at 6:15 AM 4 comments:

FREE Book: At the Corner of Magnetic and Main

In support of the Women in Publishing Summit this week, my paranormal women's fiction novel At the Corner of Magnetic and Main is FREE on Kindle from March 2-6th only. Grab a copy while you can!! 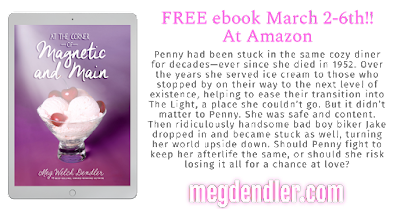 Posted by Meg Welch Dendler at 6:23 AM No comments: