Reflections on a Big Plan

In 2010, I sat in a booth at Dave and Busters in Houston, Texas, while "Mindy" and a handful of friends played games and enjoyed being teenagers. Ignoring whatever sporting events were on the multiple TVs in the bar, I took pen to white legal pad and said "what if." I had a cute little early reader book about my cat Kimba, but it seemed like it could be more and bigger and better. I'd even gotten that advice from an agent at a SCBWI conference. But what would that story look like?

After several hours of making notes and letting ideas flow, I wrote down the names of what I could now see was a series of books: Why Kimba Saved The World, Vacation Hiro, Miss Fatty Cat's Revenge, and Slinky Steps Out. I wasn't even sure what Miss Fatty Cat would want revenge for, but the title was too fun to not write down.

Back in 2010, I couldn't have begun to imagine living in Arkansas, my work with Turpentine Creek Wildlife Refuge that gave shape to Miss Fatty Cat's book, and all the events that would lead up to self-publishing the Cats in the Mirror series. Life is a funny thing.

Today, the paperback editing proof of the final book in that pre-planned series arrived. 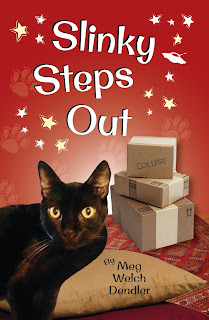 It was hard to imagine Slinky going off to college with "Mindy" back when I started this writing journey. Now it has been a fact of life for a couple of years. It makes me step back and take note that the goal I set six years ago has come to total fruition, with even another book about Max in there as well, not to mention At the Corner of Magnetic and Main, which was nowhere on my radar back then.

It makes me wonder where I will be six years from now. Already, big changes for our lives are on the horizon--not the least of which involves "Leia" heading off to college in August and leaving us with the first stages of being empty-nesters.

I often see the joke meme passed around that says, when life hits us with big stuff we don't expect, writers should know enough to yell "plot twist" and go with it. Control freak that I am, I am really going to try, though it may come off more as mumbling while I bang my head on my desk.

My hope is that there will be Dottie's Daring Day on the horizon, featuring our granddoggie Dottie and some parallel adventures to Max's book.

There really should be a Kimba's Christmas story because every series needs a good Christmas book, but I haven't got the faintest idea what that would be about.

Cheetara is quite confident that she deserves her own book, sooner rather than later. Cats are so demanding.

It would be really great to take some time to put together learning guides to go with each cat book and get more involved with home schooling groups. I'm giving lots of writer talks this year, and I'd love to keep that going and kick it up a notch. But there are plot twists ahead that I am as clueless about as any main character could be. I'm just taking each day and the list that goes with it and trying not to freak out too much.

In the meantime, you will be hearing more than you could ever want to about Slinky Steps Out come April 1st. Release date is on schedule, and it's nearly time to party about Book 4 in the Cats in the Mirror series. Whoot Whoot!!

Posted by Meg Welch Dendler at 1:45 PM No comments: