When Betty first started filming the TV Land series Hot in Cleveland, her castmates had endless questions about her husband, Allen Ludden. She thought it was a little odd, he had passed on many years before, so she asked them why they were so curious about him. They said, “We love the look you get on your face when you talk about him.”[1]
They were seeing what everyone who knew Betty and her third husband, Allen, had known for years: their relationship was a very special one. She says he was the love of her life. But she didn’t agree to marry him easily. 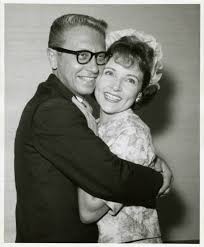 After two short-lived and unsuccessful marriages early in her life (more on that later), Betty was not terribly interested in being married again at all. Ever. She had been single for many years when she met Allen, best known as the host of the Password game show. They met for the first time when she appeared as a panelist on the show during its third week on the air in 1960. Betty did not know it at the time, but she met Allen the same week that his much-loved wife of eighteen years died from lung cancer. In later years, she got to know Allen better when they did a summer play together on Cape Cod in 1962. “We dug each other a lot,” she says.[2]

By then, Allen was a widower with three teenage children. While she loved being a pal to them and everyone got along wonderfully, she was very hesitant to become “the stepmother.” Marrying Allen would also involve uprooting her whole life in California to move to New York. There was a lot to consider. She said no and pondered and hesitated for a year.

But Allen was determined. His first marriage was wonderful, and he knew that he and Betty could have just as wonderful a life together. So, he proposed every time he saw her. Instead of saying “Hello” when they meet, he’d say “Will you marry me?” She admits that sometimes it was funny, but often it made her angry because he wouldn’t take her “No” for an answer. He even got his children on the bandwagon to help sway her.

As she continued to resist, Allen bought a gold and diamond wedding ring and assured her that one day she would wear it. When she still said no, he wore it around his neck on a chain and refused to take it off until she would wear it. He wore it for three months.

Betty says: “What finally tipped the scale was a matter of priorities. Simple as that. I faced up to the possibility of never seeing Allen again . . . of continuing my well-adjusted single life . . . which by now, of course, he had warped out of shape altogether. I pictured what it would be like to turn on the television set, through the years, and see this man, again and again . . . realizing I had thrown something away that often doesn’t come by even once in a lifetime. Suddenly the pieces all tumbled into place . . . the obvious answer was finally the only answer.”[3]

“Easter came along. He sent me a white stuffed bunny with diamond earrings clipped to its ears and a card that said, ‘Please Say Yes?’ So when I answered the phone that night, I didn’t say hello, I just said, ‘Yes.’”[4] Allen jokes that she finally said yes because of that stuffed bunny. She has never regretted her decision.

Betty and Allen were a wonderful team. He was her best friend. She says that Allen used to leave little love notes for her around the house in unexpected places so she could find them by surprise. She still has them all. 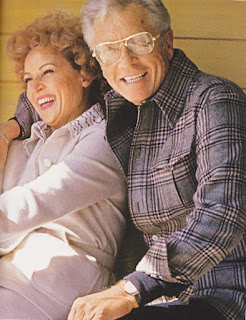 When she married Allen she suddenly became stepmother to three teenagers, but Betty says she never wanted to have children of her own. Her career was so busy, and she didn’t want a child to “get the short end of the stick.”

“I didn’t think I could do justice to both career and motherhood,” she says. For some people, it works just fine, but she personally felt very strongly about it and has not regretted her choice. Suddenly becoming the stepmother of three teenagers was a major life-change, but she says they got along great. They even called her Dragon Lady, just to tease her. She still stays in touch with her three stepchildren. “Even after all these years, we love each other dearly, and I am most proud of the children this career girl inherited.” [5]

Betty and Allen were happily married until his death from stomach cancer in June of 1981. She is quite adamant about the fact she never considered remarrying, though there have been rumors over the years, even as recently as 2013. “Once you’ve had the best, who needs the rest,” she says.[6]
{Check back next Monday for the next chapter "Beginnings of a Career"!}

[6] White, Betty. April 29, 2014. Daily Mail Online. “‘My Two failed marriages were my fault’: 92-year-old Betty White on her romance regrets and the one she got right.” http://www.dailymail.co.uk/femail/article-2616125/My-two-failed-marriages-fault-92-year-old-Betty-White-romance-regrets-one-got-right.html.