Though she had never stopped working, Betty had been on a quieter career track for many years after The Golden Girls ended. That was until two big events came her way: a now infamous Snickers candy bar commercial and a job hosting Saturday Night Live.

Betty had done commercials for decades, so she couldn’t have had any idea what excitement and attention would come from her few seconds of promotion for Snickers candy bars during the Super Bowl in 2010 as part of their “You’re not you when you’re hungry” campaign. Watching Betty get tossed in the mud during a friendly football game (though it was actually a stunt woman for that part) thrilled audiences. Her commercial beat out 60 others and won USA Today’s Ad Meter as the best liked Super Bowl Commercial.[1] The commercial even has its own Facebook page.

It might be hard to prove that this commercial re-launched Betty back into the hearts of America, but she has been as popular as she was at the height of her career ever since. It was like the world rediscovered her.

At about the same time, there was a huge fan-based campaign to have Betty host the live late-night variety show Saturday Night Live. Betty had been asked to come and host the popular skit television show three times before during her career, and she had always declined. But in January of 2010, a campaign was started on Facebook involving over 500,000 fans called “Betty White to Host SNL (Please)” to inspire the producers of SNL to bring Betty on as a host. Again, they called her. But this time she agreed and hosted the show live on May 9, 2010.

Betty says it was a “terrifying proposition” from the moment that she said yes.[2] Maybe it was Betty those hundreds of thousands of fans had to convince, more than the SNL producers. They were happy to have her host. 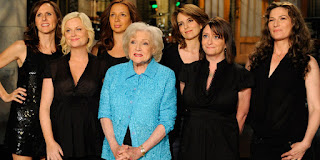 Her gutsy move to take on this live-TV challenge at 88 made her the oldest person to ever host the show. She says that the entire cast of SNL was wonderfully supportive, and Betty admits that, despite her fears, she enjoyed it. It was the highest rated TV show that night and the highest rated episode of SNL in 18 months. Betty was awarded another Emmy as Outstanding Guest Actress on a Comedy Series for this appearance. She had suddenly come to the attention of a new generation of TV viewers.

Lorne Michaels, long-time producer of SNL, had nothing but praise for Betty. He says that we can all learn how to be better by having good examples of greatness around us.

“I think everyone in America seems to have been watching that show,” Michaels says. “Betty White is a person that everybody always liked, but you never got to on some level thank her for that. People were moved by how crazy about her they were. She was as close to elegance as comedy ever gets, and I think for everyone working that night that was a master class.”[3]

Betty was suddenly everywhere, but she was about to get even, well . . . hotter.
{Come back next week for the chapter "Hot and Off Her Rocker"!}

Posted by Meg Welch Dendler at 8:05 AM