Betty remembers being terrified to get up in front of people when she was in grade school. By high school it was better, but she never totally outgrew that stage fright. It still happens today every time she goes onstage. Butterflies in her stomach.

“Butterflies, as beautiful as they are,” she says, “should stay in the garden where they belong.”[1]

Betty believes that all actors have stage fright of some sort and it is just part of the job. And she still feels it.

“Waiting to make an entrance onstage, your mouth dries up, you can’t get your upper lip down off your front teeth, your heart is around your knees.”[2]

“You’re taking a chance every time you step in front of an audience,” she says. You could forget your lines or make a fool of yourself. It is about fear, but it is also about embarrassment. You run that risk every time you step on stage or in front of a camera. “So is the stage fright due to fear of forgetting lines? Fear of drawing a blank on what to say? Fear of making a fool of oneself? All of the above.”[3]

Backstage before taping an episode of The Golden Girls in front of a live audience, each of the stars had their own way of dealing with their butterflies. Betty says she would get “aggressively cheerful,” trying to rouse up the spirits of the group.

“Unable to stop myself,” she says, “all I need is a letter sweater and pompoms.” But she admits she may sometimes overdo it a bit. “One night all three of those ladies are going to deck me.”[4] 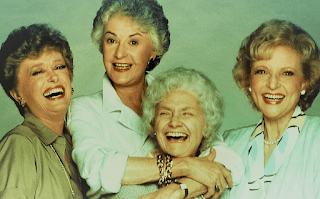 And big award shows are just as bad, if not worse. She says that while you are sitting in your seat or at your table you forget about the whole big audience that is there with you. But if you win and have to go up on stage and face that audience, it is overwhelming. “When you turn around, the impact of what you see scares anything out of your head that was ever there!”[5] She does not prepare speeches, and she is always sure she will not win, even though she does quite often. 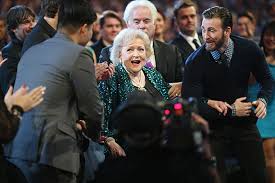 She also admits that she hates “red carpets”—the walk into the award show where stars are expected to do interviews and have their photo taken by hundreds of paparazzi. She says these events are fun to watch at home, but the reality of it is very different. It is blinding and deafening and you can be easily overwhelmed by the yelling and commotion. But she realizes that it is part of the job.

“You can’t resent it,” she admits. “It’s a necessary evil to promote a project. It’s a hazard one just has to get over. It’s not my favorite part of my job. . . . I would rather go to the dentist for a root canal.”[6]

One way that she gets through them is the sense that her beloved husband Allen is still nearby. When she wins an award, he is up there with her. “. . . he’s never very far from me. Ever,” she says.[7]

“Stage fright is uncomfortable and all that, but it’s a life saver. Because the panic that sets in you’ve gotta counter, and you’ve gotta get a handle on that in order to do what you’re doing. So the stage fright is what puts the edge on a performance.”[8]

Based on all the awards she’s won over the decades, Betty has certainly learned how to make that stage fright work in her favor. And as viewers, we are none the wiser about those butterflies in her stomach.
{Come back next week for the next chapter "Advice and Success"!}