As with last year, the War Eagle Fall Craft Fair was our best event of the year. The mornings were chilly, but every day warmed up and was sunny and beautiful. Perfect fall days for kids and parents and grandparents to head home with copies of my books and smiles on their faces. We saw license plates from Wisconsin, Michigan, Florida, Oklahoma, Missouri, Texas, and Nebraska in the parking lot. The whole fair is a real party.

What was also thrilling beyond belief was to connect with fans who already have the Cats in the Mirror books, love them, and came by to get the new ones or just say hi because they already have them all. One grandma yelled, "There she is!" across the crowded aisle and grabbed up a Miss Fatty Cat toy to go with the book, along with Max's Wild Night and his toy. A pair of grandmas, who were vendors near us at the spring fair, stopped by to say how much the grandkids love the books and carry their Kimba and Hiro toys around with them. My writer-heart could not be prouder.

We also found out that the owners of the booth that moved across the aisle from us this fall are fans, and we even got to meet the kid readers briefly before packing-up time on Sunday afternoon.

Our older daughter and her roommate came up from Fayetteville for the afternoon and enjoyed shopping and a giant smoked turkey leg, as one must at the fair. Yes, "Mindy" has pink in her hair. It matches my new book, doesn't it? 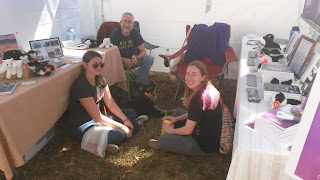 Dottie wasn't allowed over on the mill side of the fair, so she hung out with us for a bit. Booth neighbors came looking for her later. Such a sweet dog. I should write a book about her. Soon! 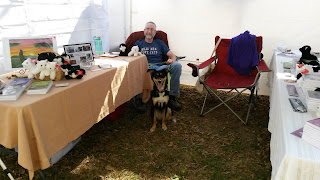 You never know who will stop by to visit. Miller the dog from the Saddlebock Brewery Beer Garden booth across the way came by to show off his new outfit from the fair. Yes, there is a bit of everything. 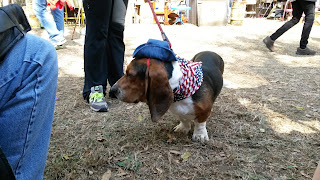 I would kind of like to sleep for a week now, but it was well worth every minute of it. One of the most interesting moments came near the end of the fair. A woman stopped and asked if At the Corner of Magnetic and Main was set in Eureka Springs. We chatted a bit and she picked up a copy. When I asked if she had ever been to Eureka Springs, she smiled and admitted that she owns the Crescent Hotel (featured in the book and home of Katie, the Irish maid). If that wasn't fun enough, she came back a while later, after thumbing through the book some, to ask if it was set at the diner on that corner of town. She knows the owners and promptly bought a copy for them. That's outstanding! I hope they like it.

We have a break from in-person events for a couple of weeks, but the blog tour for At the Corner of Magnetic and Main starts on Thursday. You'll be seeing all kinds of posts about that. Early reviews have been fantastic, so I hope it will be a great tour with new bloggers and readers to meet.

I'll leave you with one of the reviews that's not a part of the official tour, from Diane at Tome Tender:

It’s the time of year for ghost stories, want to read along with the crowd but aren’t too crazy about scary tales? Pick up Meg Welch Dendler’s At the Corner of Magnetic and Main and settle in to discover the real story of what goes on when ghosts haunt a town, because there can be life after death.

Penny is the friendly waitress, serving up ice cream in the old diner at Magnetic and Main. Although she looks seventeen, she’s been doing her job with a smile and a kind word for sixty years. Penny is a ghost, safely ensconced in her small town in a place that gave her comfort in life. For decades she has helped others go on into the light and eternal joy.


In struts Jake, the hot, biker bad boy with a devilish streak and zest for living life on the edge. Can she guide him into the light or has Jake got a few adventures left on his bucket list to take care of first? Life as a ghost will never be the same for Penny and the other resident ghosts once Jake cuts loose, but one thing happens she could never see coming…


Meg Welch Dendler has written a beautiful and gentle tale, far from the usual ghost fare we have come to expect. This is a tale of love, for life, for others and for doing the right thing, even if it is by unconventional methods. It is a tale of moving on to the next chapter and leaving the comfort zones behind for a chance at a better future. Delightful women’s fiction to savor and enjoy!