Free Book Offer and New Book Release--Keepers of the Wellsprings

Please give a warm welcome to Missy Sheldrake! I'm thrilled to help spread the word about her newest book release and also about a VERY special promo offer in honor of Book 5.


Offer: The first four books in this series will be FREE on ebook on November 29th ONLY! That's a fantastic offer, so don't miss out.

I freely admit that I have just learned of this series. It was the covers that got me. Amazing! I'm really looking forward to reading them and talking a long walk in the world of the Keepers of the Wellsprings. 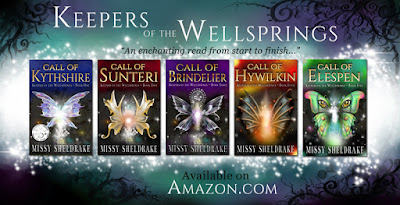 Author/Illustrator Missy Sheldrake is proud to announce the upcoming release of Call of Elespen, the fifth and final book in her Keepers of the Wellsprings series.

This epic fantasy series tells the sweeping tale of a time when ruthless Sorcerers threatened the delicate balance of the Wellsprings--secret pools of magic revered and fiercely protected by fairy-kind for decades.

“Four offerings claimed. Two left. One, I can easily get. Ceras’lain. The other, Elespen. I don’t know much about that place. Only what I saw from the ship while I escaped from Sunteri. A jungle on either side of a wide river. A city I was forbidden to enter. Forbidden, even though I didn’t even realize it at the time…” -Tib, Dreamstalker, escaped slave

“They know our victory is nearing. They know we’re the Champions of Light. They’d rather keep us here, trapped in their lair, distracted from our quest to restore Brindelier and claim the Wellsprings.” -Flitt, fairy companion to Sir Azi Hammerfel

A vindictive Sorcerer King with a century-old grudge has spent decades gathering an army obsessed with claiming what their master feels he’s owed. Threatened by his dark dealings and sinister followers, will the Champions of Light succeed in claiming Brindelier’s Wellspring for the Dawn, or will its vast power fall forever into the hands of the unforgiving Dusk?

Who will triumph, Dawn or Dusk? Ally yourself with dragons, fairies, mages, knights, and muses in the epic conclusion to the Keepers of the Wellsprings series.

What reviewers are saying about the Keepers of the Wellsprings series:
“…this book had nice readability and should appeal to a wide range of audiences. Too often fantasy is written far too mature, or too childish. The author does a good job of not talking down to her audience, which leads to this readability range.” Fatho, Amazon Reviewer
“Azaeli is an awesome young lady; one to watch in the role model stakes.” -T.L. Clark, Author
“…an enchanting read from start to finish.” J. Ortiz, Amazon Reviewer
“Epic, Epic, Epic, wow what an incredible book, story and entry to a fantasy realm. This has movie possibilities written all over it. Magnificent writing, adventure with good and evil and some that are in between the two. Dark forces and forces of light. It simply doesn't get any better.” -Kindle Reviewer 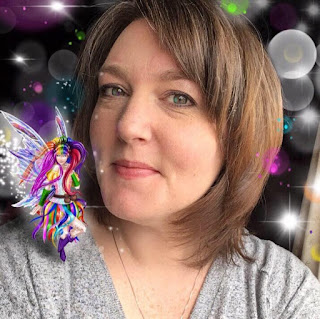 About the Author:
Missy Sheldrake is an author/illustrator who has been conjuring images of fairies in one form or another for as long as she can remember. The wind in the trees and the rich scent of forest earth are her most treasured sources of inspiration, and on most mornings you will find her wandering the wooded paths of her neighborhood, dreaming of the next adventure she hopes to put to the page. She published her first novel, Call of Kythshire, in March of 2015 and intends to keep writing as long as the fairies in her dreams allow it.

Galleries of illustrations and excerpts from the Keepers of the Wellsprings series can be viewed on her website and blog. 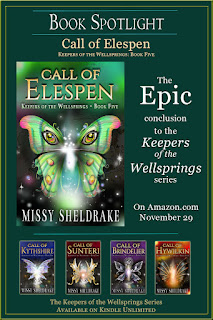